Improvements in this release include supporting more use cases when unpacking lists/tuples/sets -- this is the current focus in PyDev right now: making its type inference/code-completion best in class ;)

Also, the new constructs on Python 3.5 are already supported in PyDev in its Python 3 grammar (i.e.: async/await, and @ matrix multiplication).

Another nice feature added in this release is that it's possible to select constructs to be folded by default when an editor is opened (as the image below shows): 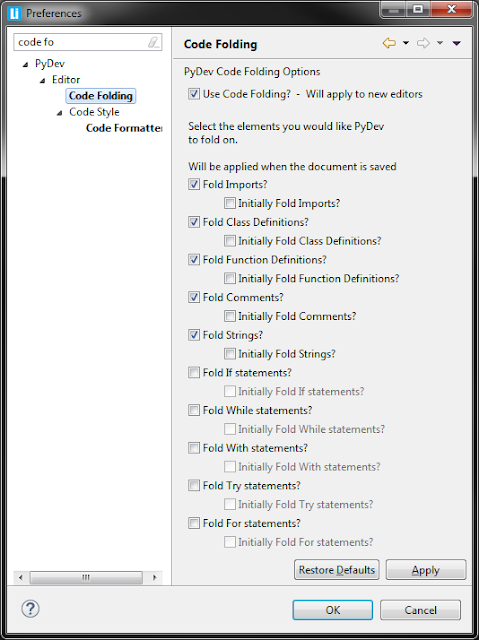 Posted by Fabio Zadrozny at 4:07 AM

Niiice!! I actually love using folding!
But I noticed some mess ups in Eclipse when doing this. So sometime when you write collapsed parts expand for a split second and collapse again. Can you confirm on that? Was something like this actually fixed?

I just installed last pydev version, but the grammar version dropbox (in the PyDev Interpreter/Grammar properties page) contains only items from version 2.1 to version 3.0; version from 3.1 to 3.5 doesn't appear. Why?

Version 3.0 is actually the latest 3.x (so, it maps to 3.5). Next 3.x versions will start to actually be numbered (until now 3.0 adoption wasn't great enough to have multiple versions, but now that it's used more it'll start to have a new grammar for each version).