Pydev 1.6.0 should be released on Tuesday (if no bugs are found until then).

The major work in this release was on the debugger, with:

1. code-completion in the console (as the image below shows) 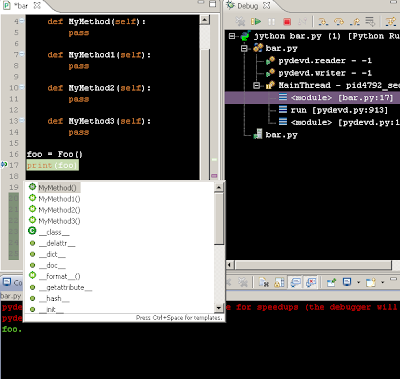 2. Code entered is evaluated on a line-by-line basis (previously an empty line had to be entered before the evaluation)

3. There's a way to work with the stack of unhandled exceptions in the debugger. There's still no way to add it in the gui, so, one has to call pydevd.set_pm_excepthook() from within the program to handle those (the module will be there whenever running in debug mode). Note that if sys.excepthook is already changed within the program, this call has to be done after that change (it will call that function and show it in the pydev stack frame right after that)

Aside from that, pydev is now compatible with Aptana Studio from 2010-07-12 and there's a fix for one really annoying bug in the compare editor when applying a patch.
Posted by Fabio Zadrozny at 5:43 AM 4 comments: