pytest fixtures: When does it make sense to use them?

Just a bit of background: pytest (http://pytest.org) is one of the main Python testing frameworks, and it provides many new ways on how to write tests (compared with xUnit based frameworks), so, the idea here is exploring a bit on making use of one of its ideas: fixtures.

Personally, I think fixtures are a pretty good idea, but seeing some real-world code with it has led me to believe it's often abused...

So, below I'll try to list what I think are the PROs and CONs of fixtures and give some examples to back up those points...


The example below (which is based on pytest-qt: https://github.com/nicoddemus/pytest-qt) shows a nice example where fixtures are used to setup the QApplication and provide an API to deal with testing Qt.


The example below shows a fixture which verifies that after each test all files are closed (it's added by default to all tests by using autouse=True to make sure no test has such a leak).

Now, on to the CONs of fixtures...


Note that this example uses the qtbot shown in the first example (and that's a good thing), but the bad case is that if we had fixtures coming from many cases, it's hard to know what the window fixture does... in this case, it'd be more straightforward to simply have a test which imports MyWindow and does window = MyWindow() instead of using that fixture... Note that if a custom teardown was needed for the window, it could make sense to create a fixture with a finalizer to do a proper teardown, but in this example, it's clearly too much for too little...

Besides, by just looking at the test, what's this window we're dealing with? Where's it defined? So, if you really want to use fixtures like that, at the very least add some documentation on the type you're expecting to receive in the fixture!


The example below shows a Comparator being created where no special setup/teardown is needed and we're just using a stateless object...


I believe in this case it'd just make much more sense creating a simple 'def assert_almost_equal' function which was imported and used as needed instead of having a fixture to provide this kind of function...

Or, if the Comparator object was indeed needed, the code below would make it clearer what the comparator is, while having it as a parameter in a test makes it much more harder to know what exactly are you getting (mostly because it's pretty hard to reason about parameter types in Python).


That's it, I think this sums up my current experience in dealing with fixtures -- I think it's a nice mechanism, but has to be used with care because it can be abused and make your code harder to follow!

Now, I'm curious about other points of view too :)
Posted by Fabio Zadrozny at 8:18 AM 2 comments:

The major feature added is that it now has vertical indent guides -- see screenshot below -- they're turned on by default and may be configured in the preferences: PyDev > Editor > Vertical Indent Guide.

This has actually been a long-awaited feature and was added as one of the targets in the last crowdfunding! 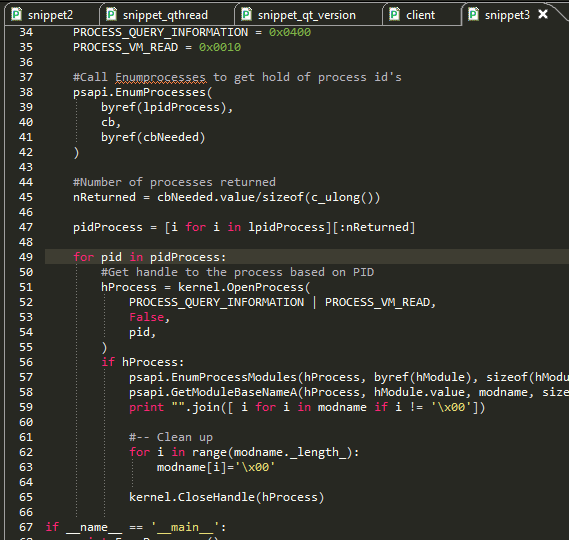 Besides this, the 3.9.0 release is packed with many bug-fixes:


Also, this release makes the horizontal scrollbar visible by default again... this is mostly because many users seemed to be confused by not having it (personally, as the editor still scrolls with the cursor and my lines usually aren't that long, it doesn't really bother me, but I can see that many users expect having it -- so, those that want it hidden have to disable it in the minimap preferences and not the other way around).

-- Note that the vertical scroll is still hidden as the minimap is enabled by default.
Posted by Fabio Zadrozny at 2:50 PM 3 comments: