This release improves the Python search capabilities to use Lucene indexes, which makes the searching faster.

This also means that actions which depend on searches such as the search for references (Ctrl + Shift + G) and hierarchy view (F4) became much faster as a result.

Also, the searches now have an improved results page which allows matches to be flattened and grouped by project, folders and modules. Also, the results page now allows additional filtering based on the module name. 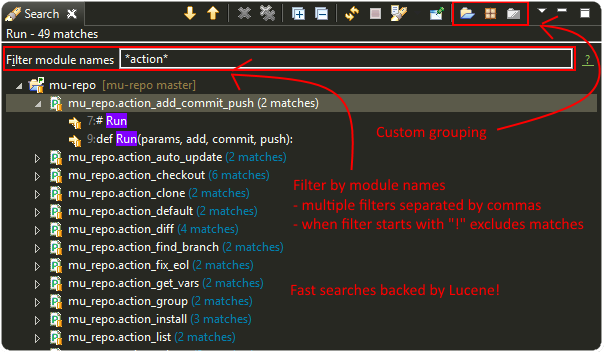 As a note, LiClipse 2.2.0, also supports Lucene based searching now, adding support for searching other languages.

Also, this release continues on the path of improving code-completion when unpacking compound types (such as dicts, tuples, sets...), which should be really good now (but if I still missed some use-case, please report it to https://sw-brainwy.rhcloud.com/tracker/PyDev/).

This release also includes some bug-fixes, including a critical issue (which affected Linux users) which could lead to high CPU usage when using the vertical indent guides (see http://pydev.org for more information on the bug-fixes).

To finish, a special thanks to all the PyDev supporters (it definitely wouldn't be possible to keep PyDev going without your help -- for those that want to help supporting it, please access the related links at http://pydev.org).
Posted by Fabio Zadrozny at 6:54 AM 10 comments: