Now that Django support is available, there are some niceties being added to make life more pleasant when dealing with files with the same name, which are very common when developing with Django (or any other application in the case of __init__.py).

There are 2 levels of support for those cases:

1. Really common files (__init__.py or in Django projects models.py, tests.py and views.py) have a special option in which the title of the editor is no longer the file name, but the name of the package containing that file, while a different icon is shown for those files (as the image below shows). 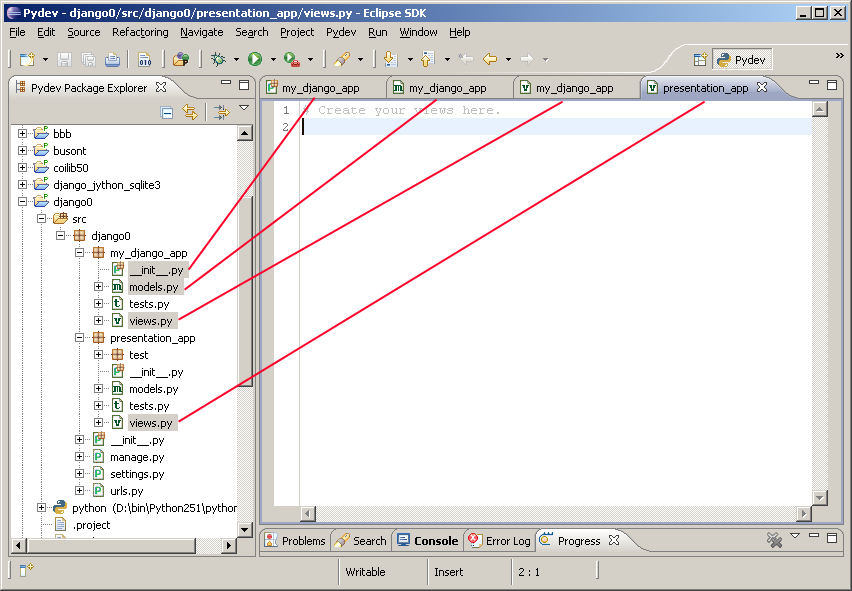 2. If there are 2 files that would be shown with the same name, PyDev will change the title of both to contain not only the name of the file, but also the name of the parent package.

Those options can be tweaked at the preferences (hope those are self-explanatory):

And with the icon available you already know it's Python right? -- So, there's an option to hide the file extensions from the tab title.

Hope you enjoy!
Posted by Fabio Zadrozny at 8:49 AM 7 comments:

A doubt that arises sometimes is how to use Pydev with virtualenv, so, here we go...

For those that don't know about it, virtualenv is a Python tool that allows one to configure a new Python interpreter that's 'sandboxed' based on an existing interpreter.

Sample use of virtualenv:

Say you have an interpreter in d:\bin\python26 (with easy_install in place).

You could do d:\bin\python26\scripts\easy_install.exe virtualenv to install virtualenv and later do:

Later, you could add new libraries just at that Python install without disturbing the base install.

E.g.:
d:\bin\Python26django\Scripts\easy_install-2.6.exe django would install django at that interpreter without changing the default one.

Now, as far as Pydev is concerned, there's nothing special in configuring a regular interpreter or an interpreter available through virtualenv. It's just a matter of following the default steps (available at http://pydev.org/manual_101_interpreter.html) but pointing to the interpreter created by virtualenv (in this case d:\bin\Python26django\scripts\python.exe).

Note: For linux users, the instructions should be similar, but the created folder by virtualenv doesn't put the interpreter at a 'scripts' folder, but at a 'bin' folder.

Update: Note that when selecting a virtualenv interpreter, the folders from the base install won't come checked by default when adding the interpreter, so, those have to be manually selected.
Posted by Fabio Zadrozny at 3:59 AM 7 comments:

As commented before, the major highlight in this release is the Django integration.

There are more details on that at: http://pydev.org/manual_adv_django.html

Other additions worth commenting are:

* The go to definition (F3) now works with unsaved buffers

* On backspace, the closing literal or parenthesis may be deleted