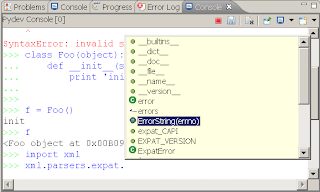 Last week I started working on an interactive console and bundling it into pydev. Hopefully it'll be finished soon (probably within the next 1-2 weeks).

The main structure is already in place... code-completion, context info on hover, history (up/down arrow), colors for stdout/err/prompt/user input, auto-indent, python/jython support, it's all there already... (but I want to add an extra layer of polishment before releasing it).

Under the hood, it's almost like a whole new editor covering the console, while communicating through sockets with a python shell (but it feels a lot like a regular editor, in the sense that the same options that are used in the editor for indent, code completion, etc. are also available from the console -- with the exception that you can actually only edit the active line).

Also, this time I was able to get some code that had an initial draft of a console from dltk (which was pretty nice), but I had to do some (not so minor) changes to be able to add it to pydev, although the basic structure still has the same idea (the result can be seen at org.python.pydev/src_dltk_console).

Well, to sum it up... this is a long-awaited feature, and the plans are for surpassing all expectations on that :)
Posted by Fabio Zadrozny at 3:14 PM 21 comments:

It's mostly a bugfix release with some of niceties:

* In pydev extensions, configuring the remote debugger in a different machine is now easier: mostly setting the constant in pydevd_file_utils.py (in the remote machine being debugged -- see the comments on the file).

* In pydev, having a speed up from using psyco was really nice!

* The improvements in the outline view (by Laurent Dore) and having a more reliable Go to Next/Previous method (Ctrl+Shift+Up/Down) are also pretty nice :)
Posted by Fabio Zadrozny at 5:31 PM 2 comments: